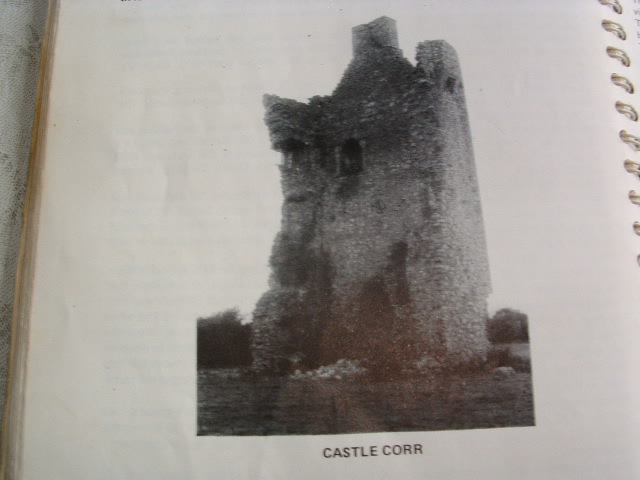 The McGillycuddy Family were a sect of the O’Sullivan clan and deprived their patrimony (extra name) from Aileen O’Sullivan, Bishop of Lismore, who died in 1253.

Lismore was a monastery founded by St. Mo Chuda (sometimes confused with St. Carthage) in the 7th Century. The word “giolla” means a servant or a follower and so the name means a follower of St. Mo Chuda but they shortened it to Mac Gillacuda or Mac Gillycuddy of the Reeks.

McGillycuddy chopped the O’Sullivan part of the name while all the rest kept it. Donal Mór O’Sullivan’s son was given the name Giolla Mo Chuda and it is from the man the McGillycuddy family descended.

Like the O’Sullivan’s, O’Donoghue’s and McCarthys they too moved west from Tipperary into Cork and then into Kerry and took possession of the lands Tuath San Erian and were settled by the O’Sullivan Mór in the district West of O’Mahony’s territory.

About 1450 they built a castle – Castle Corr in Irish Cáisleán an Chórraig, the castle of the Marsh. Its ruins are very visible in Magill’s field, north of Droumloughane. The family was Catholic and remained Catholic until 1718.

In the Desmond Wars about 1580 Donal McGillycuddy was killed in the fighting and his lands were confiscated by Queen Elizabeth and given to a Mr. Barrett and later to a Mr. Hussey. However, those men never really got full possession of the lands and in 1598 he got the lands back again including Árds, Whitefield (Bán Cluan) Carubeg, Shanara and Kilcoulagh.

Dónagh Mac Gillycuddy fought against Cromwell on behalf of Charles the 1st and again lost his lands and was even banished into exile where he struggled on. On behalf of Charles the 2nd and when Charles was restored in 1660 Dónagh got them back and held them in spite of all the greed and covetousness of Sir William Petty who had acquired a great deal of land in South Kerry, including all the lands of O’Sullivan Mór.

However, in 1688 Dónagh’s son, Cornelius, took the side of King James II against William and probably fought at the Boyne where it is thought he was killed. It is thought that he or his father Dónagh burned the Castle Corr. And tradition has it that Dónagh was responsible for getting his servant to dig a hole wherein he put all his treasures and when he had it filled he cut off the servant’s head so that no one would know where the treasures were hidden. It is said that many people in later years made efforts to discover the hidden treasures. But when they had dug a certain depth a cock of hay always fell into the hole and so finished preparations so that the treasures still remain under ground some where in the big field known as the Castle Field.

When peace was restored in 1703 Cornelius’ nephew Denis married a Blennerhassett lady and in 1718 perverted to the Protestant religion and so got back part of the estate, Whitefield, Mealis, and Shanara with some lands in Glencar but lost the better part Carubeg etc..

Lisibane was the property of Roche, nephew of Mr. Sugrue who resided at Coolgown House, Beaufort and was sub-tenant of O’Mahony’s Dunloe. The lakes and lands of Coomcaillee were also included in Roche’s estate and were sold to James Shea, Jerh Sullivan and John Coffey (Marshal) but the water remained the property of Roche and hence to the latest owners of Dunloe, the Germans.