Even in their darkest days at the height of the Penal Laws, Kerry people kept up their interest in education so that a foreign visitor in the early nineteenth century remarked that he had heard some ordinary Irish Peasants, use, not alone Gaelic, their native language, but they also used some Latin Phrases. That may have been a little exaggerated as most likely only a few had knowledge of the classics but that does not say that ordinary people had not a great interest in learning as to wit, how often they risked their lives in attending the proclaimed “Hedge Schools” in order to get at least the rudiments of learning.

Catholics Schools were forbidden and of course so were Catholic teachers so they had to betake themselves to out – of – the – way secrets places to carry on school generally out of doors and hence the name Hedge Schools. In bad weather they used some sort of rough cabin often erected during the course of one night. Sometimes, no matter how carefully they kept a watch for raids by the military the Red Coats stole on them with orders to slay all sundry, so that the blood of pupils and teachers stained the green sward. Those Hedge School teachers were highly educated men and had a good knowledge not only of the ordinary routine school subjects but also of those in a higher plane such as advanced mathematics and menstruation, the classic Latin and Greek, Irish Language and Poetry, English and History and Geography.

Eoin Rua O’Suilbeahain, the famous Kerry Poet and genius was one of those teachers and many anecdotes are told of his great versatility in language Irish or English or even Greek or Latin. His notice of intending to set up school in Knocknagree is a gem in itself.

Eoin Rua of course held many other schools, one in the house of a Nagle Family near Fermoy. He was employed by Nagle as a Spailpín or Labourer and one day a servant maid said she wanted to write a letter to the Master, but could not write. Eoin Rua volunteered to write it and he wrote it in four languages, in Greek, Latin, in English and in Irish. The Master on getting the letters enquired who he was and having questioned Eoin Rua, employed him to teach his children. He did well for some time but committed himself in some way that he had to run, followed by the master with a gun. Fermoy military barracks was not far and in he rushed to join the army. He was later transferred to the navy and fought in the battle of Port Royal of which he wrote the poem, Rodney’s Glory”.

Eoin Rua O’Suileabhain wrote a letter to the Parish Priest of Knocknagree Rev. Ned Fitzgerald. He wrote it in English and Irish but only the English version remains. He was advertising a Hedge School he was about to start in Knocknagree in 1783.

Please to publish from the Altar of your Holy Mass

That I will open school at Knocknagree Cross

Where the tender babes will be well – off

For ‘tis there I will teach them their Crios Cross.

Reverend Sir, you will by experience find

All my endeavours to please mankind,

For tis there I’ll teach them to read and write.

The Catechism I will explain

To each young nymph and noble swain,

With all young ladies I’ll engage

To forward them with speed and care,

With book – keeping and mensuration

With Trigonometry and sound guaging

And English grammar with rhyme and reason

With the grown – up youths I’ll first agree

To instruct them well in the rule of three.

Such of them as are well able

The cube root from me will learn.

Such as are of a tractable genius

With compass and rule I will teach them

With rhyme and reason

And sweet love letters for the ladies”

Eoin Rua began the school but like all his schools, did not last long.

This Parish (Duogh) too had its Hedge Schools even down to the 1870’s. Mr. Fleming, great grandfather of Jack Fleming, was a teacher in a famous Hedge School in Kilgobnet and in 1837 Samuel Lewis reported that there were 180 pupils under instruction in this parish in those schools. There was also a Hedge School in Mealis – Gairdin na Scoile can still be pointed out.

In 1831 the National Education Act was passed giving permission to Catholics to teach and attend schools. It also provided grants to build schools and to pay the teachers. In the Hedge Schools the pupils had to pay the teachers and provide for them.

The one big drawback in those early National Schools was that the Irish Language was not to be used and Irish History was not to be taught.

Cullina National School was the first school in this Parish built in 1835. Kane O’Mahony of Cullina House (no relation of the Dunloe Mahonys) gave a grant of £200, a site and some acres of land for its support and that of a teacher. The building was a two – storey solid construction with an inside wide stairs leading to the top storey. Girls were taught in the top storey and boys in the lower.

It would be impossible to give a list of the very great number of assistant teachers who served in the school during those years. About 1870 the school was divided into Boys’ and Girls’ Schools. The first Girls’ Principal was Mrs. Reidy, mother of the late Dean Reidy. She was succeeded in 1910 by Catherine Coghlan, transferred from Gortboy N.S. She was succeeded in 1920 by Mary Coghlan and when she married and left the area Bridget Coghlan took up the position and remained as principal until the two schools were amalgamated on transference to the New School. The school was a four – teacher one but now it has become a five teacher.

The new school, the present one built in 1950 is not on the same site as the old one. The old one was about 400 yards further west on the opposite side of the road at the end of John Clifford’’ field. It was pulled down and the site is now used as a dumping ground by the County Council for road materials. It is a pity that the old building was demolished as it had very solid walls and could be converted into comfortable dwelling houses and the old landmark, which so many parishioners knew so well, would still remain.

Kilgobnet National School was built in 1876 and it’s first principal was Andrew O’Sullivan, a native of Sneem. It was said that Andrew for some years walked home to Sneem on Friday evenings and walked back again on Sunday evening for work on Monday.

No motorcars in those days and anyway teachers were so badly paid in “Passing rich at forty pounds a year” as the poet Goldsmith recalls, that they could not afford the cheapest mode of transport.

In 1900 William Coghlan succeeded Andrew O’Sullivan and in 1929 he was transferred to Cullina National School and James Kennedy from Ballymalis was appointed principal and he in turn was succeeded by Dan Clifford.

Kilgobnet School too for a time was divided into Boys’ and Girls’ apartments and Mrs. Foley, nee O’Neill, was the first and last principal, as it reverted back to an amalgamated school.

At the moment Kilgobnet are looking for a site for a new school, which they find very hard to obtain.

The subjects taught in National Schools up to 1921:

Arithmetic and Mensuration to a high degree

Algebra and Geometry to Book III and trigonometry

Irish could be taught as an extra for two hours per week.

After 1921 everything changed, all subjects had to be taught through Irish. Then after 1940 the stress on Irish eased and it became optional to teach many subjects through English.

Gortnascarry National School was built in 1896 and its first teacher was Mrs. Cashman, nee Foley, Brookhill. She was succeeded John Coffey, Carubeg in 1932 and he was followed by Maureen Clifford of Cullina in 1962 and in 1969 the school was closed and both teacher and pupils were transferred to Kilgobnet National School by bus.

Gap of Dunloe National School was built in 1869 and had many teachers from time to time. Owing to its inaccessibility, teachers do not stay there very long.

The present teacher is Mrs. O’Sullivan, nee Butler, who lives in Kenmare.

Gortbee National School was built in 1896 and its first teacher was Catherine Coghlan, later transferred to Cullina. She was followed by Mrs. Fitzgerald (mother of Fr. Tom) and in 1919 when numbers increased it was made a two-teacher school with Gilbert Fitzgerald as principal. He was succeeded by Miss Baker who in turn was followed by Kathleen Mc Carthy and then came Sheila Brennan, nee Doyle, and she continued there until the school was closed in 1964 and teacher and pupils were transferred to Cullina National School by bus. 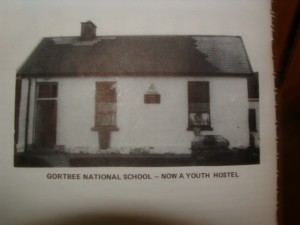